Is the Two-Pillar Global Tax Reform a threat to zero-10?

Is the Two-Pillar Global Tax Reform a threat to zero-10? 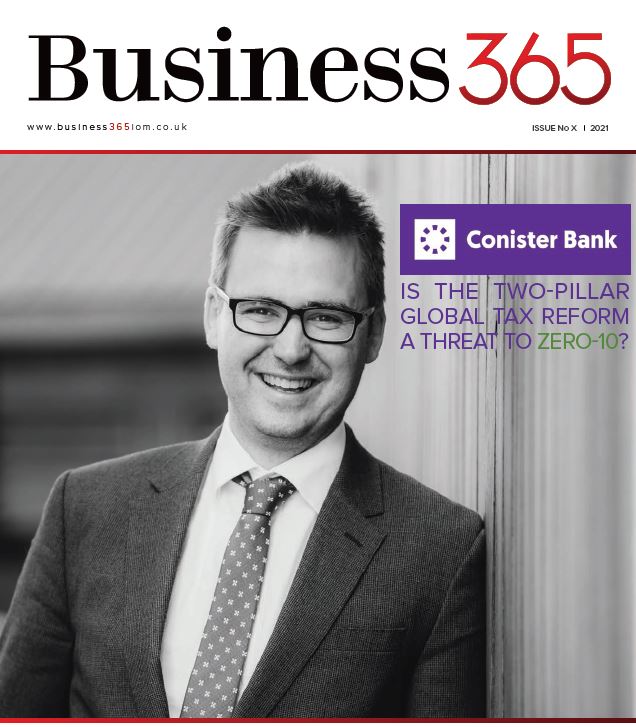 The Isle of Man needs to make sure it is best placed to withstand a wave of global tax reform that is inevitably coming, says Conister Bank’s James Smeed.

James, Finance Director at Conister Bank, believes the Isle of Man must ensure it’s ready for the changes when the G20 countries finalise the details of proposed tax changes thrashed out at the G7 summit earlier this year.

In June, finance ministers and central bank governors of the G7 committed to a global minimum corporate tax rate of 15% and to work to a solution as to where taxation should be paid by multinational companies.

Following the summit, the Isle of Man joined a high level, two-pillar plan to ensure that the largest multinational enterprises pay tax where they trade and earn revenue, a move away from the previous regimes of paying tax where value is created.

At the time, Chief Minister Howard Quayle said the Isle of Man was well-placed to respond to the evolution of international standards, pointing to the island’s track record over the past two decades.

In 2016, the Isle of Man, along with more than 130 other jurisdictions committed to the Base Erosion and Profit Shifting (BEPS) standard drawn up by the OECD in 2016.

James agreed the Isle of Man is in a good position to respond but warned the devil would be in the detail of the final arrangements and said the Manx Government and businesses should be aware of any implications and opportunities.

The Isle of Man should work with other jurisdictions to ensure that the fine print of any global accord does not risk adverse unforeseen consequences.

At the same time, the changes could open new markets in future, and the Island should make sure it is well-positioned to capitalise.

‘There is an opportunity for the Isle of Man to make sure we are still a jurisdiction that attracts employment and large corporates,’ said James.

‘This is something that is coming and will be something that will have wide ramifications as soon as within the next 12-18 months, so now is the time to act.

‘If the Isle of Man Government is alert and can work with other jurisdictions, there is no reason the island can not only futureproof itself to deal with these changes but find a way to benefit from them.’

The risk, he said, was that while on the surface the proposed tax reforms did not represent an imminent threat to the Isle of Man, it would be how definitions were drawn up under the regulations and what other changes they could open the door to.

He said the Isle of Man should not be ashamed of the zero-10 tax regime. Over the past 50 years, said James, the island ‘has danced to the piper’s tune, including the VAT sharing agreement in place of Common Purse arrangements, and revising this twice in recent times which had a hefty impact on the Government’s finances.

The Island was an early adopter of Common Reporting Standard and beneficial ownership sharing information with competent authorities and had always shown co-operation on an international level, including the Paradise Papers global investigation that hit headlines.

But he believes the potential changes on the horizon could become a step too far if not monitored closely.

‘This global tax reform threatens our biggest USP as an island to attract and retain economic activity, and will likely affect us all,’ he warned.

‘It risks taking away the government’s ability to set its tax rate as it sees fit. It is like a retailer not being able to put its product range into the sales to stir up business activity.’

The Two Pillars – Pillar One

Following the deal earlier this year, the G20 has emphasised the need for a detailed plan for implementation to be agreed upon by October 2021, alongside addressing the remaining political and technical issues for both pillars. The target date for implementation is 2023.

The initial agreement at the G7 summit was hailed as ‘historic’ by both UK Chancellor Rishi Sunak and US Treasury Secretary Janet Yellen but many experts say the fine details could be complicated by the tax system that exists in the USA.

He said: ‘Two pillars are coming as part of this upcoming tax reform. Pillar One is aimed at very large multinational companies, those in scope with turnover greater than 20 billion euros – which will likely reduce to 10 billion euros in future. The OECD has estimated that about 100 multinationals could come within the scope, but host countries are expected to be allowed to apply lower annual turnover thresholds to companies headquartered in their jurisdiction.

Although the headline figures suggest there may be no impact on the Isle of Man, there is a much lower limit to separate business segments that operate in jurisdictions such as ours.

‘Even if you do not physically have a presence in a country, they can shift up to 30% of profits there if revenue exceeds more than 1 million euros and tax them accordingly at the source.

‘This would seriously deter any large multinationals that would want to set up operations here on the Isle of Man.’

‘However, there is a lot of debate and detail to ensue to establish the mechanics of this and the Isle of Man needs to find a way to the table to contribute to this discussion.’

He pointed out that that financial services and extraction (mining) companies were set to be excluded from Pillar one.

James looked back at the situation regarding Apple, which shifted operations from Ireland to Jersey back in 2014, in what many perceived to be a response to the tightening of tax rules in Ireland. Jersey was chosen from a ‘beauty parade’ of low tax jurisdictions, among the Isle of Man as a contender, and was maligned in the press at the time for impure motives.

‘Was Apple wrong to relocate its operations to Jersey to minimise its tax bill?’ he asked. ‘Whilst it’s true that it sold its products to other jurisdictions at a distance, did those jurisdictions tax authorities not receive import duties or VAT on goods sold?

Did the consumers not enjoy their iPhones at a fair price?’

If the issue is about Apple’s ability to achieve economies of scale around tax, compared with smaller companies that could not benefit from such arrangements, are not economies of scale an issue for all market participants. Does not the sole trader struggle to overcome the cheaper manufacturing costs of SMEs?

He said it could be argued that the huge multinationals could be considered a market force themselves to help reduce the tax rate of global governments to a more level playing field for everyone.

The danger of the rule changes, he said, is they could be telling multinationals at the level of Apple that they could choose where to set up, which could have a negative impact in the Isle of Man.

Elon Musk’s recently announced plans to build a new satellite station on the Isle of Man with Starlink is an example of a global operation that could be affected by Pillar One, he said.

He questioned whether the eGaming sector in the Isle of Man would have taken off in the way it did – helping to plug a gap from the VAT sharing agreement with gambling duty and indirect taxes – if the Pillar One and Two proposals had been in place.

Pillar Two covers multinationals with revenue greater than 750 million euros, which will be taxed at 15%.

‘Of particular concern is that countries will be free to apply lower annual turnover thresholds to their country and other jurisdictions must respect them,’ he said.

‘This will be collected by a top-up tax in the ultimate parent’s headquarters if it is covered under the “inclusion” rules.

‘So if that was in London, HMRC will take a top-up payment for all of its subsidiaries operating in other jurisdictions, at a rate less than 15%, such as the Isle of Man. This cost will surely be passed via the “right to tax back” onto the subsidiary and effectively make redundant the Island’s zero-10 regime.

‘If the “inclusion” isn’t applied, then there will be an undertaxed payment rule which is a secondary backstop. This would deny deductions to be made in the HQ’s tax return.’

The only apparent sector exclusions under Pillar Two are pension and investment funds, although the shipping industry appears to benefit from a de minimis.

‘These details are still to be finalised and I would have thought left to their own devices will have a negative impact to the Isle of Man.’

James said: ‘Even if these proposals do not immediately impact us, as they seek to address multinational companies, there is nothing to stop governments – once these mechanisms have been established – from lowering the thresholds and bringing more and more companies into foreign government tax nets; much like how FATCA paved way for CRS.’

‘Once the mechanism has been established, it can invalidate the Isle of Man’s zero-10 regime, particularly in respect of Pillar Two and the “right to tax back” regime.’

He added: ‘The Isle of Government would be wise to engage with friends and foe at an international level now to seek to influence how the Pillar Two agenda is finessed and implemented at a global stage. Hopefully, it has already started that process.

‘The island needs to fight for its USP now, otherwise, it runs the risk of a global tax reform, which seems inevitable that it will come, being deployed in such a way that serves another irreversible blow to the Manx Government’s finances.’

‘At the same time, there is a wide range of opportunities for the Manx Government, to take advantage of this reform and make the Island a top jurisdiction for large multinationals in the future.’

James said: ‘Conister Bank is an independent institution that has adapted to many changes, both domestic and international, over the years.

‘It is in our interests, but also the Manx economy, to support a collaborative effort to see the Manx Government engage with counterparts to ensure the island’s economy remains strong and the Isle of Man continues to offer the perfect location for businesses of all sizes.’

The article can be found digitally at Business 365