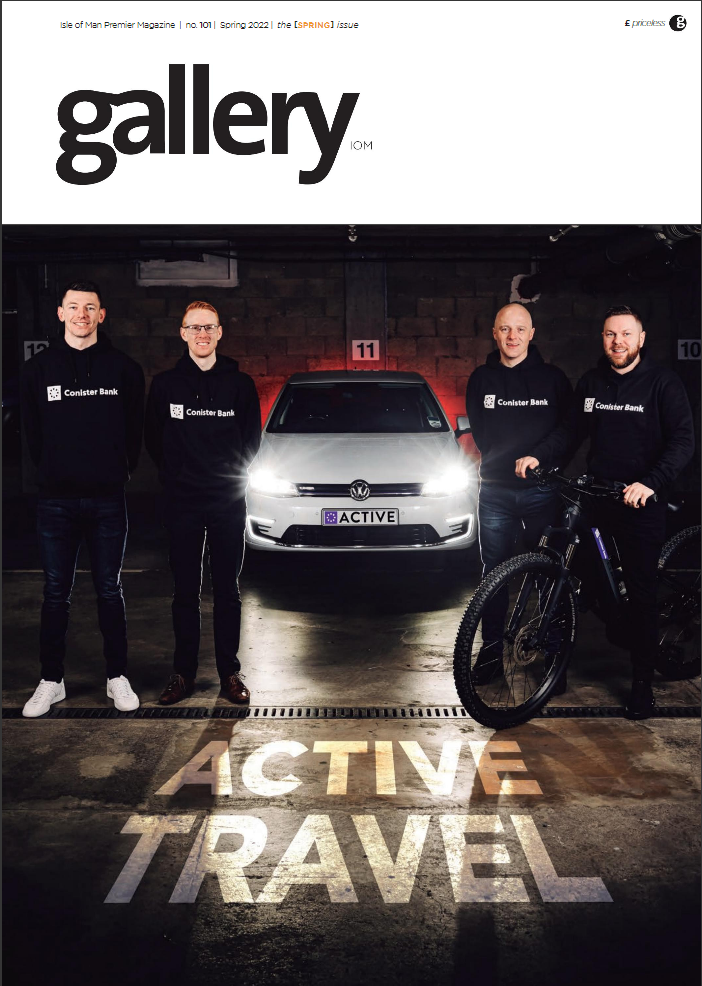 When you are in the business of lending money to companies and consumers, putting your money where your mouth is goes with the territory. If one of your core aims is also to promote sustainable finance, then backing words with action becomes even more important.

These days, we often hear the term “greenwashing”. That’s where a company gives the impression that it’s being empathetic to environmental issues but actually does nothing more than pay lip service to the idea, just to look good.

But where others may be falling short with their eco agendas, at Conister, the Island’s premier community bank, staff have gone the extra mile to push their carbon-neutral credentials.

The bank has been a long-standing advocate of Green Finance, funding a wide range of environmentally focused sectors, such as retro-fit housing, renewable energy, sustainable food production, waste management, electric vehicles and eBike. With transport in mind, Conister are encouraging more people to get involved in what’s known as ‘Active Travel’. The aim of this is to highlight the importance of becoming less reliant on cars where possible, particularly when it comes to those two or three-mile commutes to work.

To underpin the Bank’s support for this environmental initiative, Conister recently sponsored an on-Island event titled ‘Enabling Economic Opportunity Through Active Travel’. The event was attended by the Island’s Chief Minister and leading figures from the local business community.

The occasion was fronted by Chris Boardman, the former Olympic cycling champion and the current Greater Manchester Transport Commissioner. He’s had great success in helping de-congest the Manchester road system from the polluting effects of shorter car journeys, by installing an 1800 mile inner city cycle network.

Whilst no one is suggesting the Isle of Man requires anything on the scale of Manchester, the stark messaging from the meeting was that from an economic and health viewpoint, the Island needs to take action now to reduce the inexorable increase in traffic.

The debate is now ongoing as to how the Isle of Man can successfully create a more eco-friendly, active travel-focused transport system. Certainly, becoming less reliant on cars and switching to cycling and walking are lifestyle changes that many of us might agree with, but how often do we actually put these good intentions into practice?  This brings us back to Conister.

As part of the drive to facilitate this change, the Bank’s Sales Team has embarked on an Active Travel Challenge. The Team thought it would be constructive to show how long a typical commute to work actually takes if you compare going by car, bicycle or on foot. What transpired has been condensed into a lively and informative video, which is now available for viewing on the company’s website.

With two of the team driving an electric vehicle, one cycling on an e-bike and the other relying on good, old-fashioned shoe leather, the aim of the exercise was to see who could arrive fastest at the Conister office in Victoria Street, Douglas. The starting point for the “race” was the Shoprite car park in Onchan, a journey of about 2.5 miles.

Setting off on a crisp sunny winter’s morning just after 8.30 am – during peak commuter time – it was fascinating to see how they all fared. The car and eBike encountered plenty of traffic in Onchan Village and also at Governor’s Bridge and approaching the prom at Broadway. But it quickly became clear that there was only going to be one winner between those using wheels, given the bike’s ability to nip in and out of the queueing traffic. What was even more surprising, however, was the relatively short time gap between the car journey and the walk.

For the record, Andrew Moody on the bike arrived at the office in the quickest time – just 12 minutes. This was a full seven minutes ahead of the car with Tom Charmer and Lee Gale onboard. Walker Andy Bass reached the office in 31 minutes – only 12 minutes slower than the motorised transport.

This just goes to show that if you live a couple of miles from work, by setting aside an additional 15 minutes in the morning and fifteen minutes in the evening, you could leave the car at home and enjoy a decent walk to the office. Interestingly, if you cycled, you’d actually save time.

“We thought it would be a constructive exercise to actually film the travel experience and the relative time variations between the different transport approaches,” explained Conister Bank’s Head of Sales and Associate Director Andy Bass. “We were pleasantly shocked by what we discovered. It was surprising to see that it took only 12 minutes longer on foot than by car.

“Our experiment showed that if you live in a built-up area, like Onchan, it doesn’t really take that much more time to walk than if you use the car. And if you use pedal power, that’s the fastest way of all.”

However, Andy was also quick to explain that the healthy or eco-friendly approach to commuting wasn’t always practical. “We understand that it isn’t always feasible to leave the car at home, but we want to encourage people to think about making small changes. If you could walk or cycle to work once or twice a week, or when the weather looks reasonable, then why not give it a go.

“It must also be recognised that, currently, many people might feel put off cycling because they don’t feel safe on the roads. Then there is the issue of being appropriately “suited and booted” for work on arrival. This is why discussions around the whole area of Active Travel need to be openly discussed between Government and the business sector. At Conister, we are here to support positive change that will benefit the environment, the economy, and our individual health,” Andy added.

As Conister continues to support the concept of Active Travel, expect to see more sustainability initiatives emanating from the Bank’s enthusiastic environmentalists in the future.

To watch our first Actival Travel Challenge click the link.

The article can be found digitally in the Gallery Magazine.