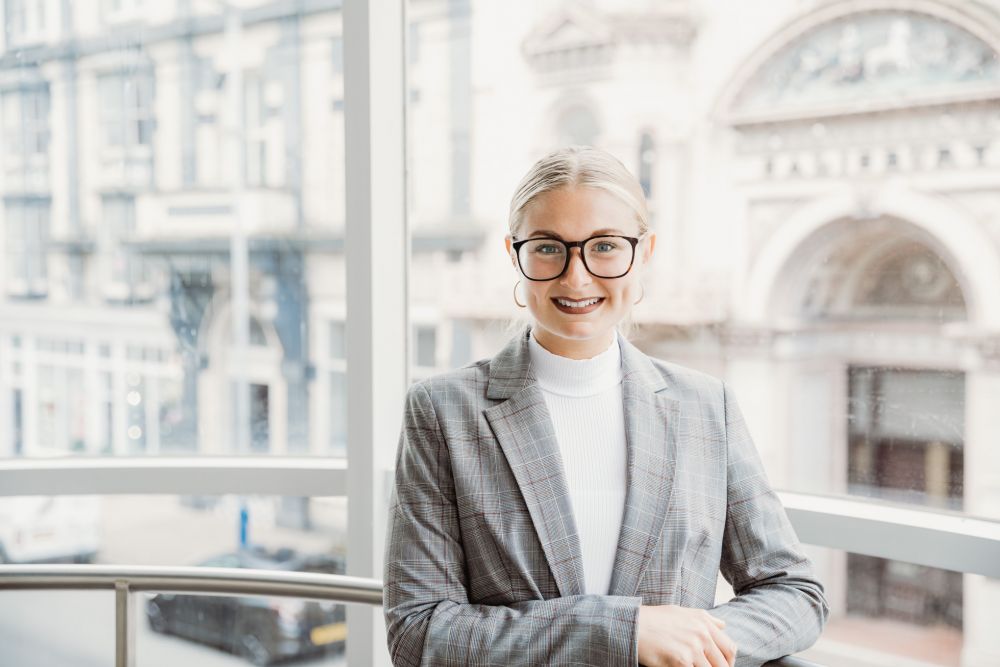 Conister has supported thousands of local businesses with financial backing over the years.  But it’s not often we get the opportunity to do so for ‘one of our own’.

Step forward, Clara Isaac! At a time when we’re all being encouraged to recycle our waste and take an active interest in being more sustainable – a cause close to Conister’s heart – we were delighted to be able to support Clara in what initially started out as a side business, but which has quickly turned into a highly successful and expanding operation.

For a number of years, Clara was our Head of Accounts. Although she left recently to set up her own online payroll company with her husband, she has always had a passion for the environment.

Just over twelve months ago, she started up Recyclecollect.im, offering a domestic kerbside recycling collection service. Initially, handling 50 pick-ups a week, today the business is collecting up to eight tons of material per month from over 700 homes across the Island. Now employing five staff, the demand for Recyclecollect’s services are growing all the time.

This month, Clara gave a presentation to the Conister Bank sponsored Isle of Man Chamber of Commerce Sustainability Group, explaining how a bright idea has turned into a shining example of how to make a positive environmental impact.

Ironically, her inspiration arrived during the dark days of Covid restrictions. “Throughout lockdown, we watched countless programmes about climate change, the environment and wildlife and I felt completely helpless,” she recalled. “Working in the finance industry, apart from what I was doing personally, I wasn’t doing anything to progress our place in the environment.

Coincidentally at that time, Conister was setting up its own ESG team and Clara was invited to be part of the committee. “I thought this is my calling and the very first meeting was about recycling. Where I lived didn’t have kerbside collection, then the penny dropped. I discussed it with my husband, Andy and he thought it was something we could really develop.”

Utilising their expertise in cloud-based software (now working to good effect in the couple’s online payroll company), they created a tech strategy tailored to an online subscription-based recycling collection service. Recycle Collect charges customers £3.99 a fortnight or £103 per year to take away plastics, cans, cardboard and paper. Different coloured boxes are provided so consumers know how to separate out their recycled waste. It’s easy to register and reminders are emailed the night before a collection is due. The software also provides drivers with their collection times and locations.

Whilst Douglas and Braddan have their own collection arrangements, Clara’s workforce serves the rest of the Island. They are also working closely with the Isle of Man Creamery to collect cartons.

The business now employs five part time staff who make weekday collections between 7.30am and 2.30pm.

“We are super active in the local community, trying to educate schools, businesses and also have a large presence on social media, which has really encouraged engagement,” she said.

Encouraging children to get involved

Clara explained that compared to what it takes to extract these materials from our natural resources, so much energy can be saved by recycling - 95% on aluminium, 75% on plastic, 70% on steel and 40% on paper.

She pointed out that whilst the Government operated a Bring Bank scheme for recycling, this still necessitated driving to a tip which wasn’t necessarily convenient for everyone and increased overall carbon footprint. It was also hard to police and people could easily drop off contaminated waste by accident.

“With our kerbside collection, the sorting process takes place at your doorstep, so we can all get involved. For children, having these coloured boxes in the home, they can get involved too, which is very important,” said Clara.

The company initially purchased a Ford Transit van that they had modified to accommodate floor to ceiling waste streams. Demand has been so great they have now taken delivery of a second vehicle – proudly sponsored by Conister, KPMG and onlinepayroll.im.

Clara said that before she started the business, she wanted to be sure where the waste ended up. “I wanted to be confident that what we collected wouldn’t be chucked in the general waste. I had to be convinced that whatever I did could be verified.”

60% of collections are glass and this, as with steel, stays in the Isle of Man for processing. Cardboard goes to Lancashire, plastic to Yorkshire and cardboard and paper to N Wales. All these materials are tightly packaged in curtain siders and sent off to their respective locations.

In the first 12 months of operation, Recycle Collect has picked up 71,284 kg of recyclable waste. “I was absolutely blown away from where we started,” she said. Currently, the most prolific recyclers appear to be in Santon (8.33% of households) and Arbory (7.45%). Both have benefitted from engagement with the local authority, which offers a discounted rate for collections. “Take up went up by 70% in the first month after working with the parish,” revealed Clara, who said the plan was to get similar arrangements in place elsewhere across the Island.

Clara said her target was to grow the service to such a level that it would require 15 EV powered vehicles and between 45 and 60 staff.  “We need to educate people to understand more about recycling to encourage participation across the IOM, making it an inclusive service available for everyone.

“It’s incredible what we’ve done in 13 months. This plan could be rolled out and scaled to the whole of the IOM – we aren’t there yet, but it’s all about awareness,” she explained.

She recognised, however, that people may be reluctant to pay over and above what they already pay on the rates for waste collection. “If we can reduce our general waste whilst increasing our contribution to recycling, we will get to a cross-over point of cost reductions,” she said. Whilst local authorities might be reluctant to rebate consumers "it might enable them to use the money in other ways,” Clara suggested.

She said the speed of growth had been greatly assisted by partnering with corporate organisations on the Island. “Sponsorship has helped massively. At Conister, everyone was so committed to the cause and for that, I am extremely grateful along with all the other companies who continue to back us.”

Asked whether she planned to make the service available for local businesses, Clara said that her priority was on domestic collection but that she would be happy to engage with existing commercial operators and to help encourage workplace involvement, should it be required. She urged companies to get in contact with her if they wanted to participate in the kerbside service.