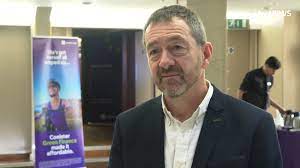 Startling statistics revealing the upside of replacing short car journeys with walking and cycling have been laid out to senior figures from the Island’s business and political community.

Less congestion, improved health, being more productive at work, a boost for retailers, more money to spend on holidays, even an increase in property prices, are all benefits if people becoming less reliant on their cars, they were told.

But the cost of not doing anything and allowing ever more traffic onto the Isle of Man’s road network would have a major economic and health impact, was the ominous warning.

These were the stark messages from Greater Manchester’s Transport Commissioner and former Olympic Cycling Champion, Chris Boardman, when he spoke in Douglas this week at an event called, ‘Enabling Economic Opportunity Through Active Travel’.

The meeting, sponsored by Conister Bank, with close support from the Isle of Man Chamber of Commerce, was attended by senior political figures, including Chief Minister Alf Cannan and more than 100 representatives from the Island’s business sector.

Mr Boardman was joined by Brian Deegan, Greater Manchester’s Infrastructure Lead, who has been heavily involved with Transport for London in combatting congestion in the capital. They revealed the challenges they faced and the reasons behind the delivery of Greater Manchester’s £1.5 billion fully integrated transport system, based around ‘Active Travel’.

Mr Boardman revealed that there had been a 44% increase in Manchester residential road traffic over the last 10 years, equating to a staggering 1.8 billion extra miles being driven past people’s homes annually. The city’s cost of just leaving things as they were - factoring in congestion, traffic accidents, air quality and suppression of exercise - stood at £3.75 billion per year and rising.  Currently, across the UK, he disclosed that every man, woman and child subsidise car use to the tune of £900 per annum.

“The Isle of Man has the same problem as the UK, car usage, especially over short journeys of a mile or two, is on the increase,” he said.

Working with the Mayor of Manchester, Andy Burnham, he said the city now had a country-leading 1800 mile cycling network, based around the needs of local people, to encourage them away from their cars. Many of the changes had been quite simple and not overly costly, such as putting in zebra crossings on side roads, to make it easier and safer to walk to work, schools or the shops and ensuring that, wherever possible, cyclists didn’t have to make right turns into traffic.

Declaring that not taking actions to reduce car use was “akin to malpractice,” Mr Boardman said politicians in general were now starting to see it was negligent not to do something, for which “our children would pay the price.” But he added: “If people are going to change, they are going to WANT to change.”

Mr Deegan, who is one of the UK’s leading street designers, said he had put together an economic case for walking and cycling to work in London. “We have to stop the misconception that driving is good for the economy – it isn’t,” he said. “Building more roads attracts more cars. You are just chasing your tail,” he added, stressing that replacing short car trips with walking and cycling was proven to be good for the local economy, as well as providing health benefits.

He said every cycling scheme introduced by the UK’s Department of Transport had a cost benefit ratio of 13 to one. Research showed people were 73% more productive if they cycled to work and 54% felt happier and more energised.

Where schemes had been introduced in London, 85% said that walking and cycling was great for business. And he cited the CEO of Google, who had selected his office location in London’s Camden district, purely because of the cycle network. “This was the critical factor in his decision. He saw it as a way to attract, train and retain staff,” said Mr Deegan.

As for the retail sector, he said spending in local high streets went up by 30% if you walked to the shops, because pedestrian penetration was double that of car visits. Moreover, 45% of people used the High Street for social reasons.  And he revealed that in one London borough people now paid a property premium for car-free living, whilst millennials were much more environmentally aware and wanted to walk and cycle to get to places.

Conister Bank’s Head of Sales, Andy Bass, who opened the event, said it was an auspicious time to be discussing ‘Active Travel’, given that it had coincided with the COP26 Climate Change summit in Glasgow. “As the Island’s recognised community bank, Conister is hugely supportive of green initiatives that can enhance the quality of life, both economically and socially. We are keen to do whatever we can, working with our Island partners, to encourage meaningful change, which has the long-term interests of the Isle of Man public at heart.”

Chairman of the Isle of Man Chamber of Commerce, Rebecca George, said that she was delighted with the large number of attendees and called on the Island’s business community to get behind the active travel initiative. “Whilst the Isle of Man Government has a key role, we recognise there is only so much that they can do and it is vital that local businesses get on board.”

Meanwhile, Isle of Man Cycling Development Officer, Rob Holden, said that he hoped the event would lead to more positive steps being taken, through public and private sector cooperation, “to provide people with more choices, so that they don’t feel compelled to use their cars. It’s a worrying fact that every 10 years, private car use increases by between 25% and 30%, which is not an especially attractive proposition,” he said. “We need a concerted effort from across the Island to change to a more sustainable course.”