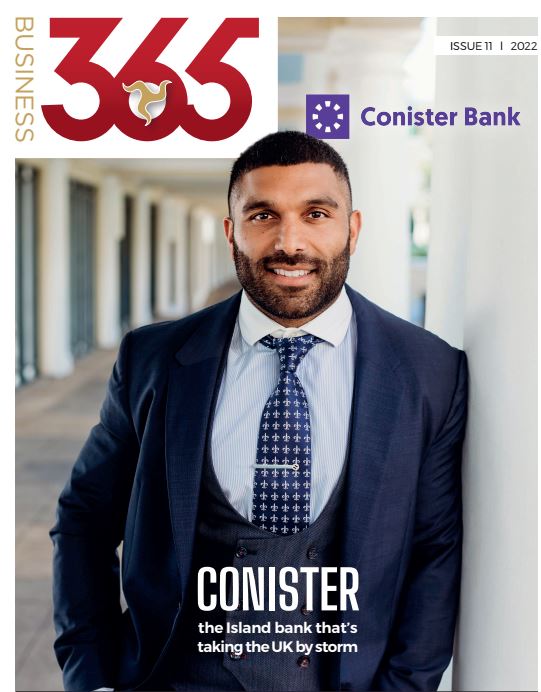 Traditionally, the growth of the Isle of Man finance sector has been attributed to established banks from the UK and elsewhere setting up subsidiary operations on the Island.

It’s rare indeed to see the Isle of Man turning the tables, where a local community bank here creates a successful banking arm ‘over there’.

Yet from their offices in Victoria Street, Douglas, this is precisely the scenario that’s playing out at Conister – with the promise of substantial further upside in the coming years.

If the global economic forecast appears bleak, no one is raining on Conister Bank’s parade, as they start to blaze a trail on UK soil. This month, after reporting their strongest growth in over a decade, the Island’s community bank, which has been providing loans and banking services locally for nearly ninety years, announced that it is making substantial growth plans in the UK.

Not that the Bank is starting from scratch – Conister Financing & Leasing Ltd has been present in the UK market for several years and currently accounts for a substantial portion of Conister’s loan book. To date, deposits are raised on Island, which has always acted as the lead regulatory authority.

But now the intention is to ramp things up to a whole new level – without losing any focus to the IOM operations the Bank is looking to bolster its UK operations to achieve its strategic aspirations.

Tasked with the responsibility of spearheading this ambitious expansion plan in the UK is Conister’s Chief Operating Officer and Deputy Managing Director, Haseeb Qureshi.

His has been something of a meteoric rise since joining the Bank in 2017 as Head of Internal Audit. Within just 18 months, he was promoted to COO and, a year later, he’d become an executive Director on the Conister Board.

Now, this self-confessed man of action and routine is working out how best to divide his time between here and heading up the UK’s new headquarters in the South of the UK.

“It’s my job to ensure that we replicate in the UK all the great work we’ve done as a Bank on the Isle of Man.  Focusing my time in the UK  will enable us to raise directly from the UK, open up liquidity, capital and forge ties with stakeholders, for example,” said Haseeb.

Throughout his time at Conister, one area has dominated his thoughts – digitalisation - and its role in optimising the customer experience. Fascinated by tech, especially its application in financial services, Haseeb’s been instrumental in driving Conister’s digital agenda, which has transformed the Bank’s IOM service offering in recent years.

Today, 70% of Conister’s IOM business is generated through portals. “From the point of contact to funding, the online portal distribution channels have driven approvals from days to hours,” he said.

Conister’s digitalised services went live around 2018. “In addition to thousands of customers that utilise our online portals, we’ve now got hundreds of partners on this platform. It’s a 24/7 customer and stakeholder experience,” said Haseeb, crediting the entire bank staff for their role in making the move to digitalisation such a success.

Despite the current economic headwinds, Haseeb is adamant that now, more than ever is a time to show loyalty to customers. “This isn’t a time to pull back,” he affirmed. “As we did through Covid, we will continue reaching out responsibly to customers, where other banks aren’t providing lending.”

In that time, thousands of customers requested payment holidays or special arrangements. It paid off – and Haseeb is proud of the Bank’s supportive stance which proved correct.  “At the tail end of Covid, not a single customer was put on forbearance,” he said. “That’s important, because now we’re heading into recession, there’s going to be tight squeezes on corporates and consumers through both supply chain issues and inflationary rises. We’ll continue to be there for customers,” he explained.

The Challenge of the UK

As for the UK, Haseeb said Conister had an attractive product offering “but we need to drive the business, as we have done in the Isle of Man.”

The bank currently employs approximately 40 staff there – about one third of the entire headcount.  “We have a strong UK management team who are already driving specialisms in the market, such as structured finance and asset finance. My remit will be to strategic growth through these divisions,” he said, adding that the forthcoming focus will extend to generating direct business.

The discussion returns to prioritising digital transformation within Conister’s UK expansion plans. He said this was necessary to tackle the competition such as challenger banks head on.

“That’s where we need to develop in the UK. It’s about our own supply chain – how we access a customer as quickly as possible. How can we make that customer experience absolutely streamlined?

“Some of our competitors have grown exponentially in the sectors we aim to target– so we know we are competing in the right sectors. Now that we are fully headquartered, bringing in the staff with the right level of interaction and the synergy between all departments, we will really be able to target the market,” he said predicting that the Conister loan book could double in the next five years.

Haseeb isn’t fazed by the economic slowdown and believes the Bank is well positioned to face the challenges head on. “If we can continue to do this now, then it really does set us up for a huge future. We’ve got exciting times ahead – in the Isle of Man and the UK.

“Above all, I’m looking forward to seeing the distinctive Conister purple banner displayed behind the name in the UK.”

A proud Manx business, making a big impression across.

Read the article in Business365