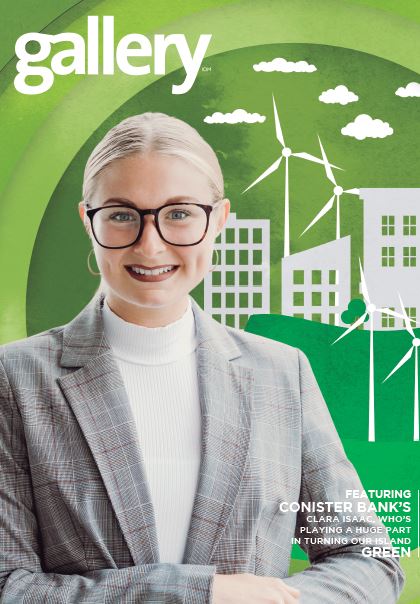 Conister Bank wants to make a difference – The momentum towards greater sustainability in the financial sector has grown significantly in recent years. It operates a business that acts responsibly, is sustainable, and promotes sustainability in what it does.

This is not new; it is part of their vision, so much so, that they have formed a ‘Green Team’ to drive this incentive internally.

Managing Director, Douglas Grant comments “It is vital that, as a team, we come together and strive to cultivate a robust community that supports the Bank’s green initiatives.

Conister’s commitment to a greener future has inspired one of its staff members that she is launching a brand-new service to benefit the island.

Clara Isaac who is Head of Management Accounting was so encouraged by Conister’s green initiatives that she is setting up a recycling collection service to offer those people who live in areas where there are no kerbside collections the chance to still participate.

Clara said: ‘At Conister, we have been doing a lot towards supporting our staff and customers as we move towards a greener lifestyle and a sustainable future.

‘I was so inspired by what can be done that I wanted to come up with something for everyone.’

She added: I live in Santon, where we don’t have doorstep collections for recycling, so I decided to see if there was something, we could do about that, and after some research, I could see an opportunity.’

The concept is to encourage people to register their interest in taking part in doorstep collections and when enough people show interest in a particular area, then we will arrange the pick-up of their recycling.

Conister Bank is showing its support by sponsoring the recycling bins that will be used in the scheme – following the same colour scheme that is familiar to residents in Douglas and Braddan.

Colleagues at the bank have already started to volunteer if a driver is needed for some of the collections, but Clara said the ultimate aim would be to have an operation efficient enough to employ a driver.

Clara said she realised that even if the will was there for many, the opportunity to recycle was limited.

‘Sixty-four percent of the island’s population live in an area that is not served by a doorstep recycling collection service,’ Clara explained.

‘As with many things to do with sustainability and climate change, there is interest, but you have to give people a viable option to take the next step.

‘We hope that a doorstep service will capture the imagination of those people who want to recycle but get frustrated about having to travel a long distance to dispose of their cardboard packaging and plastic bottles.’

Clara’s interest was piqued after joining Conister Bank’s new Green Team, which is charged with cultivating a community aim among the workforce that supports the bank’s green ethos.

‘As a member of the Conister Green Team I attended a presentation at Douglas Borough Council about recycling so that we could implement recycling into the office,’ said Clara.

‘I went home and said to my husband Andrew, “What I would give to pay someone to include me in their collection service.” It was built from there.

‘Andrew and I put a business plan together. I approached my Managing Director Douglas Grant, more as a sounding board, and to my delight, he fully supported my idea.  I then knew I had to do something and that gave birth to recyclecollect.im.

The aim will be to offer a collection service for as little as £3.99 per fortnight. This is less than the amount people spend on a cup of coffee from their favourite coffee shop a week!’

The website has now gone live for people to register interest in the scheme and Clara hopes that by September, collections will have started.

For the scheme to work, it is vital people register – and encourage their neighbours, friends, and family to do the same.

The website has full details of what you can put in each box and which materials can be recycled.

Douglas Council has confirmed it will take segregated material from the recyclecollect.im team, apart from glass which can be taken to Corlett’s here on the Island.

Recyclecollect.im will operate as a carbon-neutral company and offset any emissions.

Clara said: ‘I’ve been really pleased with the positive response I’ve had from others so far. People are very enthusiastic.

‘It is clear that local people are passionate about our island and its future. More of us are starting to believe that we have a responsibility to recycle as much as possible, both for the good of the island and for the wider world.

The timing of Clara’s initiative is significant. The various lockdowns over the past 18 months and restrictions on collections have seen a drop off in the percentage of overall domestic collection that came from kerbside recycling.

Clara says she and Andrew are committed to getting the initiative up and running in their own time.

The key objective is for more people to have access to a viable recycling service.

‘We believe if people have an option available to them that is convenient, they are more likely to participate,’ she said. ‘that means more people can play their part in securing a more sustainable future.’

The project has been greeted enthusiastically by her colleagues.

Earlier this year Conister Bank announced it was mapping out a pathway to reduce its carbon footprint.

At a corporate level, Conister Bank has implemented a Green Finance Strategy, tailoring some of its lending options to support individuals and businesses to make moves towards greater sustainability.

It has signed approved partner terms with a number of electric vehicle specialists in car dealerships and is keen to expand in that area.

It followed the findings of a consultants’ report that Conister Bank’s total carbon emissions in 2019 came to 135.9 tonnes – the equivalent to the average annual energy use in 40 homes or driving 350,000 miles in an average size car.

The report set a target for Conister Bank of reducing the 2019 emissions figure by 42% by 2029, which would see the amount come down to 78.9 tonnes.

That is coupled with the longer-term target for the Isle of Man as a whole, of net zero emissions by 2050.

Douglas Grant said: ‘I am impressed with how our staff havetruly embraced the moves we are making towards a greener future. I am particularly proud to support Clara in her venture which will ultimately benefit the island.’