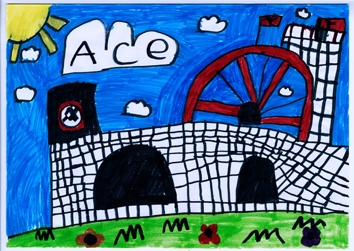 Competition entrants were given a design brief to feature the word ACE and incorporate aspects of Manx Heritage, the winning designs would then become the front of the new issue of cards which are distributed to all Isle of Man school children and provide free admission to Manx National Heritage sites.

The competition was judged by the Isle of Man Department of Education and Children, Manx National Heritage and Conister Bank who jointly support the ACE scheme. The standard of entries from schools across the Island was extremely high and judges had an extremely difficult task to select a winner.

The ACE competition judges can announce the winner of the Secondary School category is Sophie Miller from Ballakermeen High School, age 17 with her digital design inspired by the Laxey Wheel. Sophie took a photograph of the hub of the wheel and by creative use of 'Photoshop', mirrored the image to generate a striking pattern and modern design.

Sophie who recently completed her A Levels, is planning to study Media and Performance at Salford University in September. She will now be invited to see her design progress through the graphic design process and on to print on several thousand new ACE free admission cards, which will be distributed to the Island's secondary school students next term.

Sophie was presented with a £20 gift voucher from Manx National Heritage. Sophie's art teacher, Vivienne Christian, and Head Teacher, Adrienne Burnett, were presented with a £50 cheque from Conister Bank to fund art materials for the school.

Vivienne Christian said: "We are absolutely delighted that Sophie's design won the competition. She has done extremely well and the prize money will be put to good use! We plan to spend it on a stylus pen and pad which will enable our students at Ballakermeen to take digital design to a whole new level".

The winner of the 11 and under category is Elizabeth Shooter from Cronk-y-Berry, age 7 with her striking design featuring the Laxey Wheel on a sunny day.

Elizabeth, who is a talented young student, was absolutely delighted to accept her prize in the final school assembly where all her friends from Cronk-y-Berry gave her a huge round of applause! Elizabeth received a £20 gift voucher to spend in the Manx National Heritage Shops and a £50 cheque from Conister Bank was presented to Rob Sellors, Head Teacher at Cronk-y-Berry to purchase art materials for the school.

Elizabeth's vibrant design will feature on the next ACE free admission cards issued to infant and primary school children, with the newly designed cards scheduled for distribution next term.

The two runners were Jenny Farrant from Ramsey Grammar School, and Lauren Elizabeth Cowley from Kewaigue School, who will both receive a gift voucher to spend in the Manx National Heritage Shops.

Simon Hull Managing Director of Conister Bank, who has been supporting the scheme throughout 2010 and have recently, pledged their commitment to continue to support the scheme in 2011 said: "At Conister Bank we are celebrating our own heritage in this, our 75th anniversary year. We are keen to give back to our community for their support over the years and are delighted to have the opportunity to extend our support for this excellent scheme, which will encourage local youngsters to explore the Islands heritage around them". Simon went on to say, "It is inspiring to see the children's interpretation of various MNH sites illustrated in these excellent ACE card designs".

Lynsey Radcliffe, Communication Manager for Manx National Heritage commented: "The standard of art work submitted by local children was outstanding and very difficult to judge! The designs illustrated how much children understand about their Island's heritage and we are thrilled that Conister Bank will be supporting the scheme in 2011 for the second year running."

Eddie Teare MHK, Minister for Education and Children said: "It is never easy sitting down with a blank piece of paper trying to come up with an original idea. This competition has encouraged some very creative thinking and I was very impressed with the standard of entries, which would have matched the output of a creative studio. My thanks go to everyone who took part and also the sponsor, Conister Bank, who provided support and MNH who gave our students the opportunity to showcase their talents"

Laxey Wheel on a sunny day by Elizabeth Shooter, age 7, Cronk-y-Berry School. Winner of the 11 and under category.