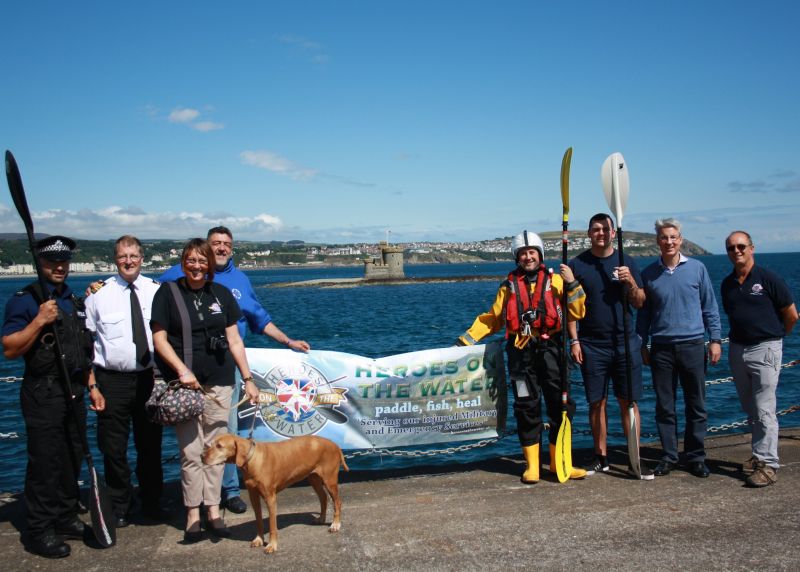 An international charity which helps to rehabilitate service personnel through seagoing sport has now taken off in the Isle of Man, with key support from Conister Bank.

The charity, which was founded in America in 2007, offers kayak angling as a way of helping to rehabilitate all those in the military, emergency services and civilian life who have sustained injury in the course of public duty.

The launch event featured a kayak fishing competition with 35 kayaks taking part on the day, including entrants from a number of local serving emergency service personnel, and support from members of Kayak Fishing Isle of Man. Two special guests were in attendance: Paul Fennell, Founder of Heroes on the Water UK, and Liam Jones, an injured UK veteran who has been helped by the initiative. Despite the wind the event was a fantastic success and with bucket collections prior to the event and money donated on the day just over £1000 was raised for the project.

Heroes on the Water is a unique therapeutic concept which isn't only accessible to the armed forces, it allows service men and women from all the emergency services to enjoy mental and physical relaxation through guided fishing events. It's also a chance to learn a range of new skills, with paddling and angling instruction given by experienced helpers. Crucially, activities are offered on an ongoing basis rather than as one-off events, meaning that the Heroes can continue to reap the benefits and develop their sporting skills over time.

Tony Palmer, spokesperson for Heroes on the Water IOM comments, "Our chief role is to raise funds for free kayak fishing courses and events throughout the year for service and ex-service personnel in the Isle of Man.

"We also plan to encourage and support visits to the Isle of Man from UK and worldwide Heroes who want to relax and enjoy new sporting and social experiences in the Isle of Man.

"Furthermore, an agreement is now in place with the Joey Dunlop Foundation to provide specialist accommodation at Braddan Bridge House free of charge – and subject to availability - for visiting Heroes participants."

Conister Bank, which has provided an independent service to people in the Isle of Man since 1935 and is renowned for its support for community projects, was keen from the outset to lend a helping hand. Says Tony, "It goes without saying that we could not have pulled all this together without the fantastic support of Conister Bank. The seed money provided by them has enabled us to purchase all that we require in order to start raising funds from day one."