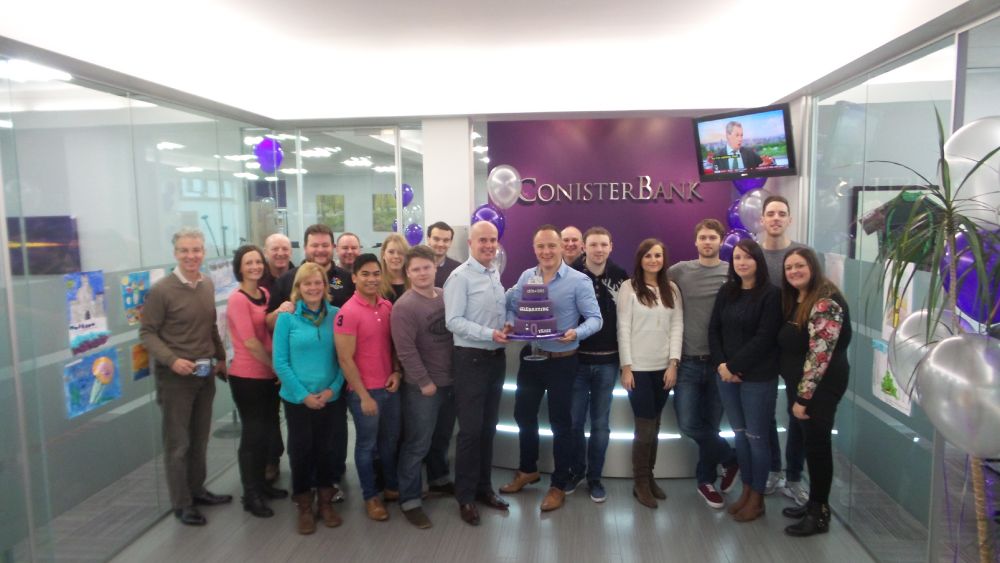 In the winter of 1935, when George V was on the throne and the prototype of the Spitfire was built, a group of Manxman founded Conister Trust, which opened its doors on Athol Street on  December 5th. . The first directors were T.R. Radcliffe – the then editor of the IOM Examiner, J. Ashton from Ashton Garage Ltd, which later became Mylchreests Motors, and R.S. Homes, a Castletown baker. Their objective was to provide hire purchase finance to dealers in the Isle of Man whose only previous option had been to look to UK companies for their needs. At their first annual meeting, Mr Radcliffe is reported to have said, “Hire purchase is here to stay and is growing in volume”. How profoundly true his words were.

Eighty years later, Conister Bank Limited is still a thriving business and a byword for independent, community-minded banking which always puts the needs and aspirations of its customers first. This month, Conister Bank is celebrating its 80th anniversary, as Managing Director Juan Kelly clarifies, “It’s really a joint celebration. We are immensely proud to have reached this milestone and to uphold our status as the Isle of Man’s ‘community bank’ but doubly proud that we have played a part in helping our customers to attain their goals through the years. The fact that we have come so far is a testament to the trust and loyalty placed in us by our customers. We have a lot to thank them for”.

When Conister Bank came into being, the first transaction came from Ramsey Motors Limited. Interest from radio, electrical and furniture dealers swiftly followed. Now, Conister Bank – which offers savings, personal loans and business finance – not only supports local businesses and residents but is proactively involved in nurturing a wide variety of community projects. Adhering to a set of traditional, consistent and passionately practised values, Conister Bank is a cornerstone of the community and can claim to have made a genuine difference to people in the Isle of Man at many different levels.

Conister Bank derives its name from Conister Rock, the Douglas Bay landmark on which the Tower of Refuge was erected in 1832. Just as that site is an enduring symbol of safety, Conister Bank has built its reputation on providing security and support in an unpredictable world just as it did during the recent financial crisis. While the Bank’s personnel and location within Douglas may have changed over the decades, the Conister core values remain the same.

As Juan Kelly emphasises, “At Conister, we are genuinely independent thinkers who listen to our customers and answer their individual needs. We turn around requests for finance quickly and all our decisions are made here in the Isle of Man. Whether you’re opening a savings account or looking for support to kick-start your business, you know that as a Conister customer, you will deal with highly skilled, professional people who place immense value in building long-standing relationships. In the 21st Century, so many people are forced to accept the impersonal experience of global call centres, and are concerned by the uncertainty of the financial landscape in the UK. The service we offer at Conister, as our customers will testify, is a world away from that”.

From empowering businesses as diverse as Noa Bakehouse and Eurocycles, to lending vital support to such initiatives as  The Youth Scholarship Programme (delivered by Adventurous Experiences) and the community newsletter, Laxey Views, Conister Bank consciously makes a difference at a grassroots level and has shown time and time again that it ‘walks the talk’ in the Isle of Man community. On behalf of the team, Juan Kelly would like to thank each and every one of Conister’s valued customers and looks forward to a future in which Conister Bank plays an ever-increasing role in supporting the local economy.