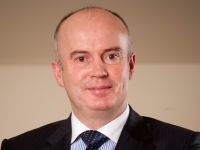 Mr Grant, who joined the company in November 2008 as a financial consultant, has also been appointed Group Finance Director of Conister's parent company, Manx Financial Group.

Simon Hull, Managing Director of Conister Bank and Executive Director of Manx Financial Group, said: "Douglas will play a key role in Conister's corporate strategy and long-term business planning, and will have overall responsibility for several parts of Manx Financial Group. Such a position is vital to the future direction of the Bank and the group, and in Douglas we have someone with the talent and drive to achieve our objectives."

Mr Grant started his career with Scottish Power before moving to the industrial sector to work with ICI and then Allenwest. Prior to joining Conister Bank, he was the Group Financial Controller and later Finance Director of The Steam Packet Group Limited. Douglas has gained substantial experience with various UK and Isle of Man private sector companies and has extensive capital raising experience.