Stay up to date with everything at Conister

Catherine will spearhead recruitment across all areas of the Group in making strategic hiring decisions relating to operations, audit, risk, sales and IT.

Commenting on the appointment, Group CEO Douglas Grant, said: “The expansion of our existing HR operation is a clear indication of our intention to pursue a high-quality recruitment programme, at a time of exciting growth. Catherine is a hugely experienced recruiter, with specific and invaluable knowledge of the financial services industry, which includes close involvement with the Manx Financial Group since 2019. Her strong industry connections, unrivalled knowledge and dedication will be hugely influential during such a significant phase of our development.”

There’s a fresh face in the Conister sales team! We’re delighted to announce the appointment of Shaun Kelly as our new Sales Manager.

Working alongside Tom Charmer, Lee Gale, and Andrew Moody, Shaun will have specific responsibility for the North of the Island, an area he knows like the back of his hand.

Welcoming him into the fold, Head of Sales Andy Bass said Shaun will be a great asset to the sales team. “I first met Shaun back in September at a sporting event in which we were both participating and, getting to know him, I immediately felt he could play a key role for us at Conister. He’s a great fit for my team and will really complement our existing sales force.”

Net Zero Matrix and the curse of Greenwashing

Net Zero Matrix – the title suggests it could be the title of a new blockbuster sci-fi movie. But it’s nothing of the sort!

It’s connected to the very real-life subject of greenhouse gas emissions in the atmosphere and the concept of net zero – a term relating to the desired balance between what’s being spewed out and what’s being removed.

It formed the subject of this month’s Isle of Man Chamber of Commerce Sustainability Group meeting – sponsored by Conister Bank.

The event held on 17th November at the iMuseum, attended by a broad cross-section of the Island’s business community.

The presentation was made by Jon Curtis, CEO of Energy Management Group, Curtis Associates, who specialise in managing data for the entire spectrum of the energy industry. Jon’s been a passionate advocate of replacing fossil fuels with renewable alternatives, advancing carbon sequestration projects. He is also behind the concept of Net Zero Matrix.

Read the article in full

Haseeb Qureshi, Chief Operating Officer and Deputy Managing Director at Conister Bank, is interviewed by Business 365 and explains how he plans to take the UK by storm as he leads the expansion of Conister Bank into the UK.

His has been something of a meteoric rise since joining the Bank in 2017 as Head of Internal Audit. Within just 18 months, he was promoted to COO and, a year later, he’d become an executive Director on the Conister Board.

Now, this self-confessed man of action and routine is working out how best to divide his time between here and heading up the UK’s new headquarters in the South of the UK.

Throughout his time at Conister, one area has dominated his thoughts – digitalisation - and its role in optimising the customer experience. Fascinated by tech, especially its application in financial services, Haseeb’s been instrumental in driving Conister’s digital agenda, which has transformed the Bank’s IOM service offering in recent years.

Clara Isaac, founder of recyclecollect.im, joined the Chamber of Commerce’s Business Sustainability Group on the 20th October to share the recycling journey she has been on since the business launched in September 2021.

For a number of years, Clara was our Head of Accounts. Although she left recently to set up her own online payroll company with her husband, she has always had a passion for the environment.

Clara Isaac, founder of recyclecollect.im, joined the Chamber of Commerce’s Business Sustainability Group on the 20th October to share the recycling journey she has been on since the business launched in September 2021.

In the first 12 months of operation, Recyclecollect has picked up 71,284 kg of recyclable waste and now collects from over 720 houses that have signed up to the kerbside recycling collection service around the island. Working together with local businesses, 2 local parishes, and implementing a modern take on waste collection to involve technology, recyclecollect.im aims to make recycling easier and convenient for everyone on the Isle of Man.

“I was absolutely blown away from where we started,” Clara comments. Currently, the most prolific recyclers appear to be in Santon (8.33% of households) and Arbory (7.45%). Both have benefitted from engagement with the local authority, which offers a discounted rate for collections. “Take up went up by 70% in the first month after working with the parish,” revealed Clara, who said the plan was to get similar arrangements in place elsewhere across the Island.

Read the full article to find out more about Clara's journey and her ambitions for Recyclecollect.

MFG Generates Strongest Group Profits in Over a Decade

Conister Bank's parent company, Manx Financial Group PLC (“MFG”) has announced that the Group’s latest set of interim results are its strongest half-year pre-tax profits for more than a decade.

The financial services group, which includes, amongst other operating subsidiaries, Isle of Man companies, Conister Bank Limited, Edgewater Associates Limited and MFX Limited, reported profits for the six months ended 30 June 2022 of £2.3 million, more than 105% ahead of the same period last year.   Total assets increased by 12% to £317.7 million; deposits increased by 10% to £253.6 million and shareholder equity grew by 17% to £27.0 million.

Douglas Grant, Managing Director at Conister Bank and MFG’s CEO, said “This is a solid set of results for the Group and lays the foundations for further growth despite the adverse economic climate.  We will continue to seek market share in recession resilient sectors, and we will continue to work with the Government and the British Business Bank to support our customers through these difficult times.”

Recognising the part played by Conister Bank’s loyal Isle of Man depositors, he added, “providing market leading rates and market leading customer service levels to our community is ingrained in Conister.  The support of our depositors is something we never take for granted.”

Manx Ventures has taken a 50.1% interest in PAL, with the remaining 49.9% share due to be acquired at a later stage, at which point Payment Assist will become fully integrated within MFG.

Established in 2013, initially to help consumers spread their garage repair payments, Payment Assist has grown significantly during the last decade. Beyond its core automotive-based lending, the company is now a leading source of short and longer-term finance solutions across a variety of business sectors, including retail and legal. The company has been regulated by the Financial Conduct Authority since 2014.

Conister Bank, one of the Island’s leading employers, has pledged across-the-board financial support for staff this winter to help meet mounting energy bills and cost of living increases.

The company has promised every member of staff an extra £200 per month for the next six months.

The scheme, which takes effect from the end of September, not only covers everyone who works at Conister Bank, but all employees of the wider Manx Financial Group, Conister’s parent company. The Group employs over 140 staff in the Isle of Man and throughout the UK.

With the expected hikes in gas bills, the volatility in oil prices and the worsening impact of rampant inflation – with the worst effects predicted to really hit home this winter - The Directors acted quickly to provide additional support for all staff members.

Conister are believed to be one of the first employers on the Isle of Man to have announced additional support payments for staff ahead of the coming winter.

The Isle of Man is in urgent need of affordable energy, which is both sustainable and provides long-term security.

That was the clear message that came out of a specially convened meeting of the IOM Chamber of Commerce Business Sustainability Group, once again sponsored by Conister Bank.

The event held on 14th July at the iMuseum, attended by a broad cross-section of the Island’s business community, agreed that a clear strategy should now be put forward to the main Chamber of Commerce Board, to help shape the Government’s future energy policy.

Recognising that it would be necessary to carry out a proper energy audit to help influence future decision-making, IOM Business Sustainability Chair Ralph Peake said:

“We can’t do anything without data, but what we can do today is realise that we all need affordable, sustainable energy – then start educating our staff, our businesses and the public accordingly.”

The meeting centred on a panel discussion featuring Andrew Langan-Newton, Leader of the Isle of Man Green Party; Julie Erskine of 3CO whose company assists the construction industry with procedures around energy-efficient homes on the Isle of Man; and Simon Sheath, KPMG’s ESG Consultant for the Crown Dependencies.

With the emphasis on affordability and energy efficiency, Ralph stressed the importance of the business community speaking with a united voice to the public and Government.

Read the article in full. 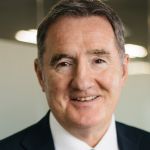 We need to be flexible, says Conister Bank’s new chairman.

Flexibility is key in terms of dealing with uncertain times.

That’s the message from the new chairman of Conister Bank, John Spellman.

Mr Spellman, who has been a director at Conister for two years, succeeds David Gibson, who has retired as chairman of the bank and director of its parent the Manx Financial Group.
During the pandemic Conister, as an independent bank headquartered in the Isle of Man, had the flexibility to tailor its support for Manx businesses.

Mr Spellman, 55, is a well-known figure in Manx business circles, having been part of the scene since 1987, save for a five-year spell working in the UK at the turn of the century. One of Mr Spellman’s most high profile previous roles was with the government agency Isle of Man finance, where he was the strategic adviser to the national strategy group and director of inward investment for finance. A qualified banker and account, he was also chairman at Duncan Lawrie and has been a director at a number of companies. Away from the workplace, he is chairman of the Isle of Man Children’s Centre.

As an independent bank in the Isle of Man, with more than 85 years in the community, Conister has built of a level of trust through its good track record and its flexibility to meet Manx needs.

‘At the core of our business are the values of customer focus, working together, a sustainable future and integrity,’ Mr Spellman added. ‘That is how we try to run things and how we try to reach our decisions.
‘It is about the community we are part of.’ He said: ‘We are subject to the same regulations as everyone else, but our decision-making, what products to offer, it is all done here. ‘People will always need a safe place for their money. They will always need the ability to borrow money at the appropriate rate and they also want financial advice.

‘That never changes. It is how you change your business model. The ability to work with the Manx community is a key part of that.’